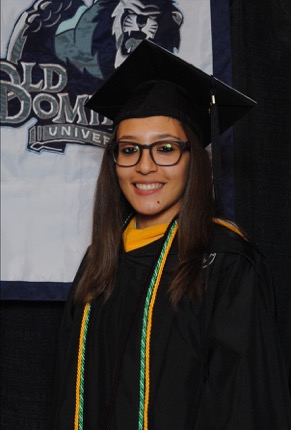 I met the Pursuit of Excellence members my senior year of high school during my interview for their scholarship.  During my interview I shared with them my goals and dreams for the following years to come.  I told them that I wanted to continue my education past high school and become a marine biologist and work with marine animals.  Not long after my interview I learned that I was selected to be a part of POE, I was beyond ecstatic.  Not only was I able to help take a burden off of my parents with having financial help from POE but I was also able to gain a mentor that would check up on me throughout every semester.  After high school due to my immigration status I was not able to attend a 4-year university like I would have wanted but regardless I was blessed to continue my education.  I graduated from high school June 2012 and I began attending Northern Virginia Community College that same August.  While living at home and attending community college I was able to be a full time student and work part time and save money for my future endeavors.  I worked and studied hard to be able to transfer to a 4-year university like I had always wanted and needed to.

December 2014 marked my last semester at NVCC and the following January I was on my way to Old Dominion University in Norfolk, Virginia.  Being away from home for the first time was very difficult for me but once I realized that I was where I needed to be I did everything I could to secure my education and opportunities for my future.  My first few semesters I focused on my classes, getting to know the campus and, networking with the right professors.  Through the clubs I joined and speaking to professors I was able to get SCUBA certified, attended a scientific meeting in Maine, and participated in fieldwork in the Florida Keys.  My last semester at ODU was my most hectic semester during my time as an undergraduate student; I was taking classes, volunteering in the coral laboratory on campus, and I was volunteering at the Virginia Aquarium. At the aquarium I was volunteering with the Stranding Response Team which is in charge of caring for dead and live sea turtles that become stranded on the Virginia beaches.  From May until December I learned a lot about what it took to take care of live sea turtles and I was also able to participate in sea turtle necropsies.  Being a part of the stranding team was one of the most rewarding opportunities I had as an undergrad. On December 17th, 2016 I officially graduated from Old Dominion University with a Bachelors of Science, I majored in Biology with a concentration in Marine Biology.  From my experiences gained while volunteering in the Virginia Beach aquarium I was able to find a very similar internship with MOTE Marine Laboratory & Aquarium in Sarasota, Florida.  At MOTE I will continue to work with sea turtles, taking care of them and learning more about them.

I am very grateful to know that a group of strangers believed in me and my dreams, so much that they were willing to help me financially.  I am beyond thankful for POE and the help they have given me throughout the years, without them and their help my journey to where I am now would have been a lot more difficult and probably not as enjoyable as it was.